We are pleased to welcome Senator Rob Portman, from the sate of Ohio for an executive exchange on trade and The World Trade Organization, China and his government’s domestic priorities.

Rob Portman is a United States Senator from the state of Ohio, a position he has held since 2010. Rob has built a reputation in the Senate as a conservative leader who can bring people together to deliver results. In 2005, Rob left Congress to serve as the United States Trade Representative. In his one year in the job, Rob was successful in reducing barriers to U.S. exports and increasing enforcement of trade laws to help level the playing field for American farmers, workers and service providers. 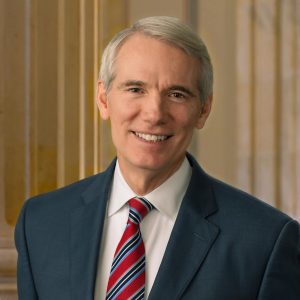 Rob Portman is a United States Senator from the state of Ohio, a position he has held since he was first elected in 2010, running a campaign that focused on common-sense conservative ideas to help create jobs and get the deficit under control. Rob won with a margin of 57 to 39 percent, winning 82 of Ohio’s 88 counties. In 2016, he was re-elected, winning by an even larger margin of 58 to 37 percent and winning 84 out of Ohio’s 88 counties.

Rob was born and raised in Cincinnati, Ohio, where he still lives today with his wife, Jane. Together they have three children: Jed, Will, and Sally. Rob grew up in a small-business family, where he learned early on the value of hard work, leadership, and fiscal responsibility. When Rob was young, his dad, Bill Portman, borrowed money to start Portman Equipment Company, where Rob and his brother and sister all worked while growing up. His father, and then his brother, built the family business from a small forklift truck dealership with five employees, with Rob’s mom as the bookkeeper, to one that employed more than 300 people.