The Future of Intelligent Mobility

The Future of Intelligent Mobility

Join us for breakfast as BritishAmerican Business together with industry leaders from ARUP and A.T. Kearney discuss how new sustainable innovations can enable us to address the challenges of rapid urbanization & mobility while minimizing adverse economic, social and environmental impacts. 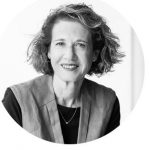 Margaret Newman is a Principal in Arup’s New York office with over 25 years of experience as an architect and urban planner in New York. She has extensive experience building complex projects in the public realm and leads public realm projects that are not only strategic and economical, but that prioritize people to better integrate planning and transportation into the fabric and context of cities. Prior to joining Arup, Margaret headed up her own consulting firm served as Chief of Staff at the New York City Department of Transportation where she directed major agency projects including the capital construction plan for Times Square.

Miriam Roure is passionate about improving cities through technology and design. She is the Senior Director at URBAN-X, an accelerator built by MINI and Urban Us, dedicated to investing in and supporting entrepreneurs developing urban solutions.

Previously, Miriam worked at MIT Senseable City Lab, a research laboratory dedicated to exploring the future of cities from a data and sensor-based technology perspective. Trained as an architect an urban planner, she also worked at the Office for Metropolitan Architecture in Rotterdam.

REGISTER
Go to Top
We use cookies to ensure that we give you the best experience on this site. If you continue without changing your settings, we’ll assume that you are happy to receive cookies on this site. However, if you would like more information about cookies or you would like to change your cookie settings at any time you can read our Cookie Policy or find out more about cookies.Accept