Our CEO Roundtable series regularly features some of the world’s leading chairs and chief executives who we invite to lead a discussion for a group of around 25 senior business leaders on key issues of importance to British and American business.  The event operates under Chatham House Rule and provides a valuable opportunity for dialogue amongst global business and government leaders.  This series is made possible by the sponsorship and support from BAB member, Willis Towers Watson. 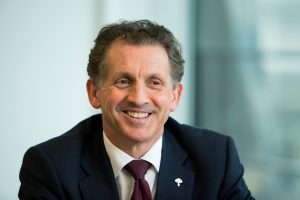 He was awarded City AM’s “Business Personality of the Year”, 2014. He also won ‘Most Admired Leader’, 2017. Nigel recently won ‘Change Maker of the Year’ at the Change Makers Summit.

Nigel was a member of the Prime Minister’s Business Advisory Group (2015-2016), Chairman of the Investment Association’s review of Executive Pay (2016-2017) and the government’s review of Mission Led Business (2016- 2017). He was also a member of the government’s Patient Capital Review Industry Panel (2017–2018) and Commissioner in Resolution Foundation’s Intergenerational Commission (2017–2018).